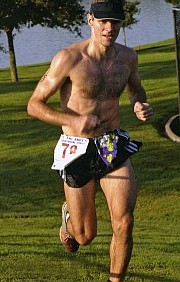 In 1987, Will Henderson arrived in Houston from Miami, Florida. Although never a runner himself, he decided to watch part of the Houston Tennaco Marathon in 1988. He remembered thinking, "Why would anyone in their right mind run 26 miles?". He was never the less impressed and figured that running would be an "easy" form of exercise to do. No special equipment and it could be done at just about any time of day. He began his own personal training program which involved running about three miles, twice a week. After doing this running regimen for about a year, Will committed to "run" the 1989 Houston Marathon, the day before the race!

Although it was one of the hardest things he had ever accomplished in his life, he completed the full marathon in a little under five hours. After being in misery for about a month after the race, Will decided that he wanted to give it another try but perhaps train a little better. For a few years following this experience, Will gradually increased his mileage until he was running around 50-55 miles a week. As time progressed, Will began to get bored with his work-outs, and began to search for ways to break up the monotony of running.

Will started with running with other individual runners which helped him mentally. However, he still remained unexcited about the prospect of long, flat runs on a weekly basis. After some thought and the addition of new baby which obviously consumed more time, he decided that he needed to find a more balanced approach to training.

Wills goal was to structure a work-out regimen that fit into his busy family and professional life. Will also wanted the work-outs to be challenging and more rewarding than the high-mileage and high-time commitment training that he had become accustomed to. Thus, about eight years ago he started running hill workouts part of the year and eventually decided to go at it year round.
Will now rarely runs over thirty-five miles a week, but incorporates intense and diverse work-outs that include both speed and hill training. Will is a firm believer in early work-outs to not only activate your metabolism and energy at the beginning of the day, but to accommodate those with busy family and professional schedules, such as himself.

Will's exercise regimen includes work-outs with his group on Mondays, Wednesdays, and Fridays for about an hour. On Tuesdays and Thursdays he cross-trains, weight-training, or basketball or bicycling. He runs longer runs on Saturdays, and trail runs (when he feels like it) on Sundays. Will has found that this diversity not only keeps exercising interesting, but also very motivating. Will tends to only increase his Saturday mileage when he trains for marathons.

Will has six goals in mind for himself and the others in his group:

At age 48, Will has not only accomplished these goals, but has also competed in over 300 races, including over 80 marathons. His most recent achievement was a 17:53 in a 5K, just 61 seconds off his personal best. In December 2006 he completed the Sunmart 50 miler in 7:37:50. And this past January, 2009, he completed the Houston Marathon in 3:05:33. Quite the change from 1989. Will credits his generally injury-free running accomplishments to his decrease in mileage, increase in speed and hill training, and running on softer surfaces.

Will believes in running for fun and challenge. To do this, it is necessary to combine several variables. Will states as follows:

I also have a wonderfully diverse group of individuals to train with. Some of the members of the group attend to lose weight, some to get faster, some just want the softer surface and diverse work-outs. All of the members are at different weights and running levels. It thrills me to see these individuals get stronger and faster as they continue to come to the work-outs.  It is also an enormous motivator for me to have such a great group of people to train with and help me with something I could never do by myself.

It is true, Houston does have hills. We will help you find them. Please come out and join us sometime, any time!!

Thanks so much to all my running companions.